The U.S. housing market has been on a dream run of late as prices are rising thanks to the scarcity of homes available for sale. While this has got housing market bulls all charged up for a stronger 2020, one shouldn’t forget that a crisis could be just around the corner. That’s because conditions that perpetrated the housing market crash of 2008 are rearing their ugly head once again.

The key factors that caused the 2008 housing market crash

Subprime mortgages proved to be the housing market’s undoing back in 2008. In a bid to pump the market, Fannie Mae resorted to loose lending requirements so that customers with a weak credit score or low savings could buy a house. A period of increasing home prices covered the underlying dangers, but once defaults began to rise and homeowners were left with negative equity, the U.S. housing market went under.

That was not surprising as homeowners with a weak credit profile and low savings had a higher amount of outstanding loans compared to the value of their homes. Foreclosures spiked and the housing market went under. The bad news is that those conditions are developing once again in 2020 and it won’t be surprising to see the market crash once again in the near future.

The red flags are here

By now, it’s evident that low mortgage rates have been driving up the U.S. housing market. Weak wage growth makes it hard for consumers to keep up with rapidly rising home prices, so they have been resorting to mortgages in a bid to buy houses.

Wage growth for the month of December came in at just 2.9% annually. This was lower than the 3.1% growth economists were anticipating. This was the first time since July 2018 that annual wage growth fell below 3%. Consumer confidence is not in good shape either. The latest consumer confidence data suggests Americans are turning negative about the jobs outlook going forward.

Lynn Franco, who is the director of economic indicators at The Conference Board, gave a shallow outlook for the early part of 2020:

While consumers’ assessment of current conditions improved, their expectations declined, driven primarily by a softening in their short-term outlook regarding jobs and financial prospects. While the economy hasn’t shown signs of further weakening, there is little to suggest that growth, and in particular consumer spending, will gain momentum in early 2020.

Still, prospects of the U.S. housing market are considered to be bright in 2020, primarily due to low mortgage rates. At the same time, loose lending is making a comeback once again. In November last year, Moody’s pointed out the same:

We expect defaults on loans underlying CLOs to increase modestly but still remain low given continued low interest rates and a slowing but still-growing economy … Weakening covenant protections and loan structures with less junior debt will continue to drive a decline in expected recoveries on defaulted assets as the leveraged loan and high-yield bond markets continue to converge.

Meanwhile, the Federal Housing Administration has increased the loan limits so that buyers can keep buying homes even as prices rise. It can be said that accessible mortgages will be a tailwind for the U.S. housing market, but they are also creating a bubble that could soon turn into a full-blown crisis.

Why a crisis is unavoidable

The U.S. housing market is suffering from a supply crunch. Realtor.com data tells us that the inventory of homes for sale dropped 12% in December, which was the biggest annual decline in three years. Concurrently, there was an 11.2% drop in new property listings. All of this led to a 3% jump in the median listing price to just under $300,000.

So, a low mortgage rate environment is important in keeping housing conditions in good shape. The Federal Reserve has played its part by slashing interest rates. But the problem is that stagnant wage growth and consistently rising home values could price buyers out of the market.

That’s probably the reason why home sales are expected to drop 1.8% this year. That renting a home in most U.S. housing markets is cheaper than buying a house could also derail the momentum. In the end, buyers could start pulling out as supply remains scarce, prices rise, and wage growth remains weak.

It probably won’t be long before the U.S. housing market bubble bursts. Prices could start heading south as sales decline, leaving buyers with over-valued homes they might not have been able to afford in the first place.

This article was edited by Sam Bourgi. 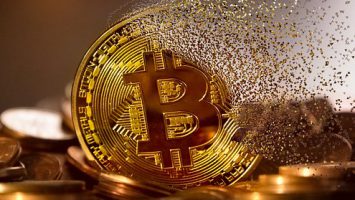